At California Repipe Specialist,  we have a recurring theme, and that theme is pipes. Today, if you Google the word “pipes” you will get all sorts results, most not having anything to do with water or gas. No, the sort of pipes that will pop up, are of the, *ahem*, recreational variety. Those kinds of pipes have been around a long time but surprisingly, so have natural gas pipes. We tend to think of natural gas as a constant, something that simply flows into our homes and provides heat and fuel. The fact of the matter is, the natural gas industry is much more complex and simply turning the gas on in your home is only the final chapter in a much longer story. You see, at California Repipe Specialist we are in the business of replacing pipes, fixing pipes and installing pipes. We perform whole home repipes, we switch existing galvanized pipes to advanced PEX pipes, we even replace and repipe natural gas lines. So needless to say, we spend a lot to time thinking about pipes.

How does the natural gas get to your pipes? What is natural gas anyway? The answers to these questions begin many thousands of years ago and it is a good possibility that natural gas was a big reason that humans learned to control fire. Natural gas is naturally occurring, but you probably guessed that but the name. We tend to think of natural gas as manufactured but in reality, only a few changes are made between the extraction from the ground and the end consumer who is boiling risotto on the stove. Natural gas was discovered by people long ago when, in areas that natural gas seeps from the ground, lightning probably ignited the gas and created fires that astounded ancient peoples. Could you imagine waking up after a lightning storm and seeing fires burning from the ground? It sounds like a perfect recipe for developing superstitions. Even instances in the Bible seem to link spontaneous fires to what we would think of as natural gas.

The harnessing of natural gas began in China thousands of years ago when bamboo was used as pipes to provide a heat source. Think about the safety ramifications of using wood pipes sealed with mud to transport natural gas. Natural gas was first observed in the U.S. by explorers taught by the Native Americans that certain areas seeped natural gas and could be ignited. During the 19th century the main source of natural gas was coal. Now it may seem like coal would be easier to use as a heating source but the majority of gas produced was used in lighting lights, the gaslight era. The advent of mass lighting in cities created a stir among many groups of people. The concern was that having light around all the time would create negative health benefits and the church argued that God had established the separation between day and night, and for us to artificially light it up, was against the will of God. Coal was heated and the gas was trapped and distributed to the lamps throughout the city. 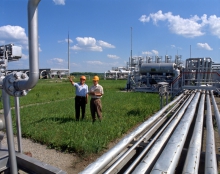 The first gas well was drilled right here in the U.S. but transporting the natural gas over long distances proved problematic and would not be a viable option until the 1920s. Small scale pipelines had been utilized before that but using welded metal allowed for the transportation over long distances. As pipeline construction and extraction technology increased so did the demand. The first pipeline was primitive by today’s standards and not as safe as it is today. Of course, with the increases in pipe technology the safe transportation of natural gas is commonplace. It took World War II to establish a network of pipelines throughout the U.S. and the usage increased dramatically.

The natural gas we use in our daily lives is not the same stuff that is extracted from the earth. The extraction methods are typical and mirror those of the oil industry, when in fact, natural gas is a byproduct of oil drilling. When there is oil, natural gas is never far away. Much of the natural gas today is produced through fracking and natural drilling of pockets surrounding oil reserves. The gas is extracted and converted into a usable form for our homes. Gas, when it comes out of the ground, contains all sorts of other gasses and contaminants, purifying it creates other usable gases and byproducts.

The use of natural gas is omnipresent in our homes and will probably continue for many years to come. It is clean burning and gives good output for how much it costs. The inclusion of the rotten egg smell has prevented explosions and accidents from occurring. The downside, however is the projected lifespan of the remaining natural gas reserves is said to be 80-100 years. So the future of natural gas will be interesting if the projections are correct. Contact the repipe experts at California Repipe Specialist today!