PEX piping is a new advent in the world of plumbing. As a matter of fact, PEX was developed in the late 1950s and early 1960s. In this article, we’re going to talk about the history of PEX piping, and the manufacturing process behind this phenomenal product. In the late 1950s, scientists developed a polyethylene structure with strong connections between individual polymer chains. These chains must be crosslinked in order to retain a structure. This structure held its shape under high temperatures, and maintained a balance between flexibility and rigidity. Thereafter, PEX was developed. PEX has the additional benefit of crack resistance on top of heat resistance – making PEX an ideal pipe material. Once PEX became an acceptable copper pipe replacement, the product market exploded. Although there are regions in the United States and throughout the world where PEX is not yet legal, PEX is quickly becoming the most used repiping material – after all, it is more affordable and longer-lasting than its copper counterpart. 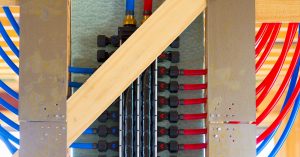 There are three different ways to produce PEX pipe:

In Europe, these three methods of extrusion are identified by their products labels – named PEX-A, PEX-B, and PEX-C accordingly. Each process has a slightly different product, with different applications.

If you’re curious about what PEX repiping can do for your home or business, feel free to give the experts a call at California Repipe Specialist.