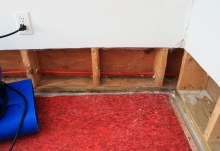 Knowing the symptoms of a slab leak, the next step is to know what is going on that creates this problem. Slab leaks occur so frequently in California because of the way the water system works and the chemicals put there, but that doesn’t have to be the only cause, and the only way to fix it is contacting the slab leak specialists Long Beach trusts.

Ways a slab leak can happen include:

If any of these happens, or you suspect a slab leak, contact the California Repipe Specialist Long Beach loves today, before any damage occurs.